We arrived in Beijing on 7 September tired, excited and wondering what to expect! After a night flight and 2 hours sleep we were greeted at the airport by John Wen – who was to be our tour manager for the next 3 weeks.   Headed for the hotel and time to grab a quick snooze before meeting the rest of the group with whom we would spend the next few weeks.

Not yet knowing anyone’s name and eyeing each other up we then headed off for our first stop – the Bird’s Nest Stadium, site of the 2008 Olympics at Beijing.  We were also introduced to Laura who was going to be our local guide for the next few days.  At the Bird’s Nest Stadium we were also introduced to the Chinese people’s strange custom of wanting to pose and have their picture taken with the ‘big nose’ westerners!  After the stadium it was off to our ‘welcome’ meal in a restaurant in the hutong area.  Time for another introduction – to chopsticks!  This was to be the first of our chinese meals of which we generally had 2 per day lunch and dinner – a selection of dishes served to a lazy susan which then turned into a bit of a feeding frenzy as we all concentrated hard on mastering the chopsticks while watching what was spinning round the table to make sure we got our share!  How we would long for western food served on our own plate in the weeks to come!

Another introduction in the first couple of days- chinese toilets!  We were warned that they were quite bad and some were much worse than others.  At best they were a sit down toilet with toilet roll (oh the luxury), at worst (at a service station) a communual channel in the floor to squat over and a little bit of wall to hide behind – but no door.  Over the weeks I came to the conclusion that the squat toilets may well have been a bit more hygenic (no contact with a seat) and certainly saved queuing with the other europeans.

Next day – we were off early to discover the sights! Great weather  – first we watched people doing tai chi and playing cards and mah jong in the park  – fascinating to see people enjoying the open space.  We then went to Temple of Heaven, followed by a walk through Tiananmen Square and into Forbidden City, home of the chinese rulers until 1912.   This was amazing – so much to take in. However, in the Forbidden City we lost Diane – a member of our group, although some of us didn’t know what Diane looked like at this point!  Anyway while we continued with our tour our tour guides were frantically trying to find Diane.  Eventually announcements were made over the tannoy system and Diane was found safe and well.

When we got back to our hotel our fears that our pay-as-you- go phones were not working in China was also confirmed.  3 weeks with no communication with the western world – what were we going to do?

Next day – Thursday – and we”re off to the Great Wall of China!  We went to the Mutianyu section which is quieter and less touristy.  We took the cable car up and I managed to bang my head hard enough to draw blood on the cable car roof – after a bit of mopping up we then had a glass of champagne to set us up nicely to feel dizzy if I didn’t before! Off we went with about an hour and a half to walk,  it was quite quiet which was nice but it was really hard going – I didn’t realise there were so many steps and so steep at times.  We couldn’t believe we were actually there – on the Great Wall of China!  We walked to the furthest point we could manage given the time and returned back for a picnic lunch! Great stuff.

Next day woke up with massive cramp in my calves from all the steps – and I’m supposed to be fit!  Off to the Summer Palace today – nice little holiday home for the Qing dynasty –   I should say! This was a beautiful place and after a quick wiz round (to set the tone for the rest of the tour) we were off for a flight to Xian – destination number 2!

We are enjoying weather of 30 degrees and blue skies!  Lovely hotel in Xian overlooking the City Walls. Saturday has arrived already and we are off to see the Terracotta Warriors today!  I am truly amazed by the sheer scale of this, the detail and the work going on to restore the warriors.  The ranks of life size pottery figures were made over 2,200 years ago to guard the tomb of Qin Shi Huangi and only discovered by farmers in 1974.

Each warrior is individual not only in their facial features but in what they are wearing – awesome!

Sunday in Xian and a bike ride around the City walls  – great fun.  After this we went to the buddhist temple – Wild Goose Pagoda and on to the muslim quarter market – another wiz round and off to visit the figures the Han Yangling tomb on route to the airport. The tomb of Jing Di is quite different to the terracotta warriors – soft lighting and few other people, allow you to peer into the tomb of a Chinese emperor who died more than 2,000 years ago.  The artefacts lie as they were found; many still partially encased in earth.

From here we fly to Yangshuo and the Green Lotus Hotel – one of the nicest! First day here we visit the Silver Water Caves, and in the afternoon we raft down the river. This was great fun and involved being taken to a mid-river floating bar where we had beer and bought fish for our driver (and had so much fun being fleeced an extortionate amount) before reboarding the raft to continue down the river!

In the evening we went to the very impressive Impression Show on the Lake directed by the man who created the opening ceremony for the Olympics – excellent and very moving!  This was a good day! 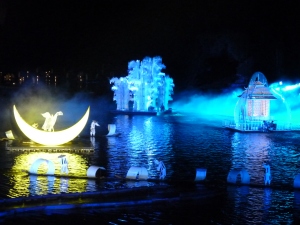 The next day we hired bikes and cycled for 2 hours around the rural area (after getting out of the town- which was a bit crazy).  In the afternoon we managed a swim in the pool and went out to find our own dinner – pizza – yum!  That evening we went out to watch commorant fishing – this was a bit disappointing as it was not how we imagined at all and was over commercialised – never mind.

Wednesday – and a long drive to the Longsheng rice paddies.  Home to ethnic minorites –  the Jong people and Yao people. This was great and well worth it. We had lunch in a minorites restaurant and climbed to the top of the hill to see the great views of the terraces.  Very hot and humid though.    We then drove to Guillin for our flight to Chengdu – however this turned out to be a low point.  Our very late flight was delayed further and we finally arrived at our hotel in Chengdu at 4am.  This had a knock on effect on the next day’s timings and resorted in a very tired and disgrunted group who then travelled 2.5 hours each way to the Leshan Giant Buddha and returned very late for dinner and a show with no time to change at the hotel. Chengdu a rapidly growing capital of area is also known as the city of bicycles – 3 million.

The visit to the Pandas reserve at Chengdu the next day was a highlight and I decided that as this was be the only chance I would get to visit the Giant Pandas I was willing to pay the £100 donation for the chance to cuddle a baby one and it was sooo worth it.  The ‘baby’ was rather large and had honey smeared on it’s paws to keep it happy and it was lovely and cuddly! It was great to see the tiny babies – some only a few weeks old in the incubators too.

From here we went by bullet train to Chongqing to board our cruise down the Yangtze and relax – so we thought!

The cruise.  Well as soon as we boarded we realised it may not be quite so relaxing as we thought. With early morning tai chi and very set and early breakfasts and lunch – it was a bit Hi de Hi!  However, we did learn about the Yangtze and enjoyed the trip to the lesser gorges – so glad we had a balcony too!  A highlight on board was our chinese massage – a snip at £15 each for 45 mins. We also had an interesting visit to the Three Gorges Dam project before departing for Suzhou.  Weather was about 40 degrees most days so very humid.

Suzhou -a beautiful old chinese style hotel – we loved it! Situated in the old town we had time to walk around the canals and drink in the bars.  Our first day involved a trip to the Humble Administrators Garden  – not so humble after all.  These were beautiful and for once we had plenty of time to enjoy them.  In the afternoon we visited the Silk Factory with a litte time for shopping and visited a show held in the smallest gardens in the evening.  The next day we had a couple of hours to look around Suzhou and the shops but we could have done with more – it was a lovely place to stroll around.

Next stop – Hangzhou and time is running out – only 4 nights left!  Weather has taken a turn for the worse with drizzly rain – shame but we’ve been lucky so far.  After our drive we vist the Six Harmonies Pagoda but it is late and getting dark when we get down from there! The next day we go to beautiful West Lake – though would have been better without rain!  While in Hangshou we went to the Southern Song Dynasty show – this was quite spectacular. We also did some tea tasting at the National Tea Museum.

Then off to Shanghai for our last 2 nights.  We had been warned it was extremely busy due to the Moon Festival holiday and last month of the Expo.

First stop Yuyuan Bazaar and gardens – it was very very busy!  We escaped to the Gardens which were very quiet towards the end of the afternoon!  In the evening we went to the Acrobatics Show and visited the French concession.   The last day and we had a bit of free time (had to book our seats for return flight as well).  We decided to head for somewhere quieter and visited the People’s Park – this was great – we got talking to chinese people who explained the Marriage Marketthat was going on in the Park, with Parent’s posting up their daughters details with the hope of finding them a suitable match -an interestingtake on match.com   In the evening we enjoyed a boat trip down the river to see the lights and the Bund – this was a highlight too and was followed by our farewell dinner! 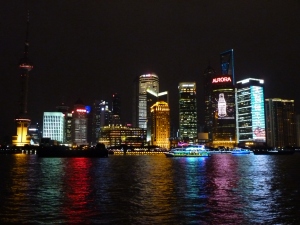 rural life and the city and the amount of development going on.  There is so much history and we experience a lot in 3 weeks – it was exhausting!  We visited lots of buddahs, learnt about all the dynasties, confucius, daoism and chinese horoscopes and that the chinese invented everything, or pretty much! The people were a great bunch- we had so many laughs and a few grumpy times too!  Highlights for me were all of Beijing, the Great Wall, the pandas, the Terracotta Warriers, Suzhou, the Rice Paddies. the Impression Show in Yangshou, the Gorges and most importantly sharing it all with Den (apart from the panda when he wasn’t allowed in) and those precious moments together when we could snatch them!

4 thoughts on “Three weeks in China…”