Well after the marathon was the next stage of the journey! The trip to Glasgow by train.  This should have been straightforward but the weather forecast had got worse and winds of 70-8o mph were predicted!

However, Den picked up a tummy bug, which meant our planned early start had to be delayed; he was certainly not able to get traveling anywhere. Luckily, Robin the owner of the B&B allowed us to stay on for a while and this allowed me to get out and buy some Dioralite and Den to try and get a bit better!

About 2.30pm Den felt able to attempt the journey and we  just about made the 3pm train for the 50 minute journey. The winds were ferocious and we could see the trees bowing wildly in the wind!  We didn’t get far before we had to stop and were told there was a tree on the line. 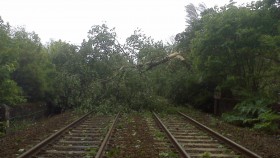 After a while we were moving again but the huge branches of the tree scraped the  sides of the train as we went.  Bit further on another stop, another tree,  another wait.  After a while the guard apologised and announced that the tree had been removed – by the train staff!   This gave us a smile and we were pretty impressed –  I couldn’t help feeling this wouldn’t happen down south.  So well done Scotrail staff on that journey! Arrived in Glasgow an hour and 5 minutes late but at least we got  there, thanks to the rail crew.  We later found out that the trains following ours had been stopped due the wind – so we were lucky indeed!