After Edinburgh Marathon we decided to ‘let the train take the strain’ and take the West Highland Line Scotrail journey  from Glasgow to Fort William. We had  read the accolades and knew this had won the Wanderlust Travel Awards 2009 for the top train journey in the world .  Our plan was to break the journey in Fort William overnight and then take the Jacobite (famous from the Harry Potter films) to Maillag and return to Glasgow.

We boarded the West Highland Line and within 30 minutes were out in the hills and then mountains and yes, it is truly spectacular.  After leaving Glasgow the train climbs to Kilpatrick running parallel to the River Clyde.

The journey continues up to 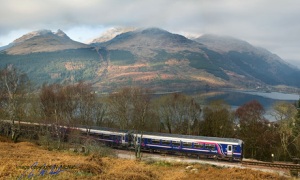 Arrochar and Tarbet with Loch Lomond and Ben Lomond on the right: not far from here the area once roamed by Rob Roy MacGregor!  Mountain after mountain and loch after loch we  watched the scenery unfold the further we were carried along.

After Crianlarich the journey continues northwards,  climbing quickly  to  Upper Tyndrum and then on to Bridge of Orchy.   The train skirts the wild Rannoch Moor with its peat bogs, streams and boulders. Rannoch station doubles as a youth hostel and is the only building for miles in this wilderness.  Then it’s on to Corrour Station, made famous in the film ‘Trainspotting’ and, at 1350 ft above sea level, the highest point on the line.

After Tulloch station on the left hand side we spot the foaming waters of the Monessie Gorge and then, after Spean Bridge, Ben Nevis looms ahead as we approach Fort William.

The following day for the second part of our journey from Fort Willaim to Mallaig we were disappointed to find that the Jacobite was cancelled due to engine failure. Though not the same experience we decided to complete the journey on Scotrail’s West Highland Line.  After leaving Fort William the train traveled  through Banavie and we saw on our right the remarkable series of canal locks, like a staircase, called unsurprisingly, Neptune’s Staircase.  Then we were onwards towards Glenfinnan to see the viaduct – the first concrete viaduct ever built in Britain and more recently famous for appearing in Harry Potter films. Lots of people rushing to take photos here! Further on past Arisaig you see the islands of Rum and Eigg, then on to Morar and finally the journey stops at  the fishing village of Mallaig.

It was a miserable wet day and so we visited the tiny Heritage Centre to learn more about the history of Mallaig, followed by some fish and chips and then it was time to reboard for our return journey south south and to see it all again in reverse!

Best train journey in the world?  I’m no expert but having done the TranzAlpine in New Zealand  I would say this has got to be as good as, and you don’t have to travel half way round the world to experience it!